CRT NEXT PRESENTS REVIVAL OF “KISS ME, KATE” IN 50th ANNIVERSARY SEASON 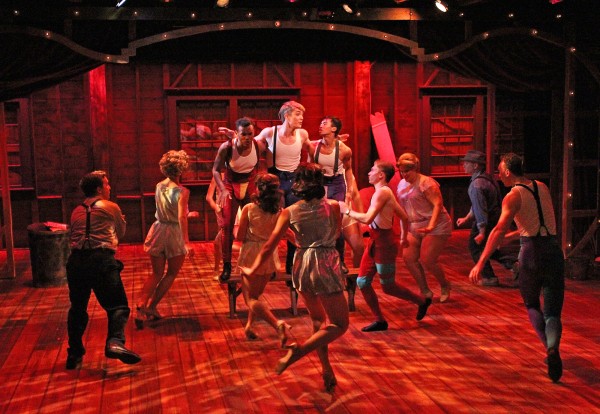 Maclain Rhine and the company of Cortland Repertory Theatre's production of "Kiss Me, Kate" perform "Too Darn Hot".

Cortland Repertory Theatre proudly presents another “revival” for the third show in their 50th Anniversary season, the well-known backstage musical “Kiss Me, Kate”. Last produced at CRT in 1984, this hilarious and tuneful show has music and lyrics by Cole Porter with book by Sam and Bella Spewack. Performances at the Little York Pavilion in Preble will run from July 6th – 16th with evening shows at 7:30 PM. Matinees are available on July 8th, 10th, and 13th at 2:00 PM. Tickets may be purchased by calling 800-427-6160 or by visiting the CRT Box Office at 24 Port Watson Street in Cortland. Tickets are also available through CortlandRep.org with ETIX, for a small additional charge. CRT cautions that ETIX is the only approved online ticket service; others charge significantly higher rates for tickets and are not approved by CRT. The GPS address for the Little York Pavilion is 6799 Little York Lake Road in Preble.

FOR  TICKETS AND MORE DETAILS VISIT OUR EVENTS CALENDAR AT https://cnyarts.org/events/events/view/kiss-me-kate

Sparks fly both onstage and off when actor/director Fred Graham attempts to mount a musical version of The Taming of the Shrew with his ex-wife Lilli Vanessi in the leading role. Added to the mix is a flirtatious ingenue, her gambler boyfriend and some musically inclined gangsters, creating a sharp, witty and riotous evening of big laughs, hot dancing and some of Cole Porter’s most classic tunes. Familiar favorites include Another Openin’ Another Show, So in Love, Too Darn Hot, and Always True to You.

Leading the cast as Lily Vanessi is Briana Gantsweg, previously seen on the CRT stage in Born Yesterday and Rough Crossing. Paired with Gantsweg as Fred Graham is Jahmar Ortiz, who also continues their role as Director of Culture and Inclusion as they did for CRT’s production of Hair earlier this summer. An Ithaca College graduate, Oritz also was a CRT Performing Intern in 2018, and was seen in Saturday Night Fever, Newsies and Our Town. CRT’s Performing Interns take on numerous roles in this production, including Syracuse University grad Emily Madison as the flirtatious Lois Lane, Nazareth college grad Dereck Atwater as her boyfriend Bill Calhoun, SUNY Fredonia graduate Alissa Rojas as Hattie, and Rider University student Maclain Rhine as Paul. The two mysterious men who throw a monkey wrench into the proceedings are played by Syracuse actor Derek Powell in his CRT debut and CRT returnee Mikey LoBalsamo, who was seen earlier this summer in Hair, and last summer in Complete Works of Shakespeare abridged. Rob Lescarbeau, last seen in CRT’s Legally Blonde, will play General Harrison Howell and Mark Bennett Roth will portray Harry Trevor/Baptista. Lois’s two dancing suitors are played by Rashawn Sangster (Gremio) from SUNY Cortland and Shaun Collins (Hortensio) from Syracuse University. Completing the cast is Conly Egnor with the rest of CRT’s Performing Intern Company: Grace Brad, Ellie Kallay, Ellie Pearlman, Weston Pytel and Reese Stojanovski. Musicians for this production include Stephen Calkins (Trombone), Sam Forrester (Reeds), Dennis Goettel (Guitar), Erica Moiser (Drums), and Jake Nicolini (Trumpet). 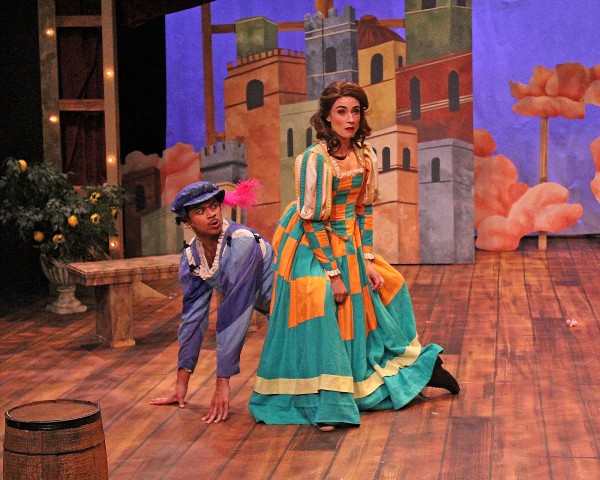 Jahmar Ortiz as Fred Graham and Briana Gantsweg as Lilli Vanessi in Cortland Repertory Theatre's production of "Kiss Me, Kate".

CRT offers a “Friday Night Talk Back” after the evening performance on July 8th, at which a Q & A session with the actors, director, designers and crew takes place. Tickets are also on sale for the rest of CRT’s summer season, which includes Agatha Christie’s Murder on the Orient Express and Disney and Cameron Mackintosh’s Mary Poppins. For the younger generation, The Bright Star Touring Theatre will present three children’s shows: The Little Mermaid on July 8 and 28, Treasure Island on July 9 and Upcycled Cinderella on July 29. All children’s shows will be at 10:00 AM. Visit www.cortlandrep.org for more information on all upcoming performances.