The Everson Museum of Art will join museums nationwide in the Blue Star Museums initiative, a program that provides free admission to currently-serving U.S. military personnel and their families this summer. 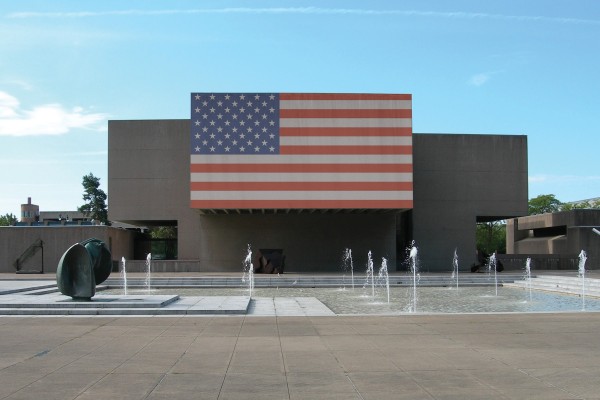 Blue Star Museums is an initiative of the National Endowment for the Arts in collaboration with Blue Star Families, the Department of Defense, and participating museums nationwide. Find the list of participating museums at arts.gov/bluestarmuseums.
“We’re honored to be a participating Blue Star Museum,” said Everson Director Elizabeth Dunbar. “Not only to recognize the sacrifices of our service members, but to also support the impact that the arts can have on military health.”
The Everson has a long-standing partnership with the Syracuse VA Medical Center that includes creative arts programming for Veterans and presenting works from the Center’s Veterans Creative Arts Festival. The Museum is also partnering with the organization Women Veterans Empowered & Thriving, a reintegration program for women veterans that utilizes creative workshops.
“Like the resilience that military families demonstrate time and again, the Everson Museum of Art is an example of resiliency in the arts sector over the past year,” said Ann Eilers, acting chairman of the National Endowment for the Arts. “We are grateful to the Everson Museum of Arts for their leadership in strengthening the community through their participation in the Blue Star Museums program this summer.”
Blue Star Museums include children’s museums, art, science, and history museums, zoos, gardens, lighthouses, and more, and hail from all 50 states, as well as the District of Columbia, Puerto Rico, and the U.S. Virgin Islands. The current list of participating museums will continue to develop over the summer.
The free admission program is available for those currently serving in the United States Military—Army, Navy, Air Force, Marine Corps, Coast Guard as well as members of the Reserves, National Guard, U.S. Public Health Commissioned Corps, NOAA Commissioned Corps, and up to five family members.
Qualified members must show a Geneva Convention common access card (CAC), DD Form 1173 ID card (dependent ID), or a DD Form 1173-1 ID card for entrance into a participating Blue Star Museum.

About the Everson Museum of Art
The Everson is a museum of firsts. It was the first museum to dedicate itself to the collection of American art, to create a permanent collection of ceramics, to collect video art, to create a docent program and to hire the now internationally-known architect I.M. Pei to design its building, a sculptural work of art in its own right. The Everson is home to over 10,000 works of art: American paintings, sculpture, drawings, video, graphics and one of the largest holdings of international ceramics in the nation. Visit everson.org to learn more.
Everson Museum
Posted 18 months ago