The public is invited to join the worldwide celebration of Make Music Day on Tuesday, June 21, 2022 in Syracuse. Make Music Day is a one-day event where free, live musical performances, opportunities to make music, and other musical events take place around the world on the longest day of the year. Musical festivities in Syracuse, New York inspired by France’s Fête de la Musique.

Local musicians will join musicians from around the world in more than 1,000 cities to celebrate the love of music and making music together.

One of those musicians/bands is Crispyonthemic. You may know him as Michael John Heagerty.

We asked each of our musicians about their love for music. Read what  Crispyonthemic had to say when we sat down and spoke to him about his music.

What is your name?
Michael John Heagerty

What is your band’s name, how many are in your band.
Tots or Crispyonthemic

Where are you from?
The Salt (potato) City

What kind of music do you perform/what instruments do you play?
I rap exclusively about Potatoes

When did you start performing/playing/singing? What got you into music?
I had some college friends who got me into it - Began writing and performing in 2006 or so.

Are there any musicians who inspire you? What qualities do you admire about them?
So many, their perseverance and stage presence and ability to entertain so many!

If your fans could remember one thing about you/your band, what would it be?
That I keep it crispy, of course.

Describe your favorite venue for performing.
Favorite Venue - anywhere that lets me get on the mic.

Tell me about your favorite performance in your career.
I'd say at The competitive eating championship of Chicken Wings held on Memorial Day Weekend at annual Wing Fest with Eric Badlands booker.  We performed in front of an unsuspecting audience of approximataly 19,000 "homefries" a song we co-wrote called Sack of Potatoes - It was absolute pandemonium when I did a simple call and answer to the crowd "When I say taters - y'all say TOTs!  And the rush felt from the audience enjoying the show lasted for days!

What's the best piece of advice another musician ever gave you?
HAVE FUN. 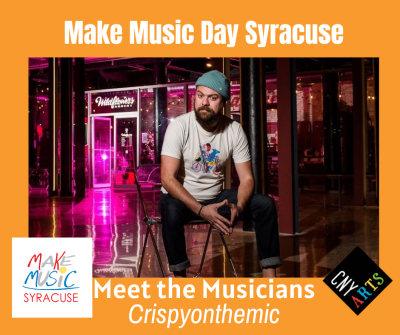 You can join Crispyonthemic on June 21 at:

READ ABOUT OTHER MUSICIANS FOR MAKE MUSIC DAY SYRACUSE