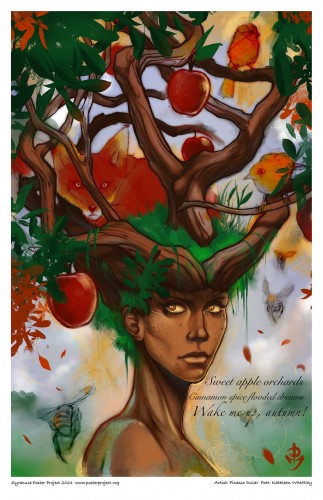 The Syracuse Poster Project brings together community poets and artists to create an annual series of poetry posters for the city’s poster panels. Each year writers from throughout the community submit haiku about downtown, the city or the nearby countryside. Artists then create posters based on the haiku of their choice. The Project selects the top posters and displays them along Salina and Warren streets, beginning in April.

Since its founding in 2001, the Poster Project has worked to enliven downtown and strengthen the city’s sense of community. The Project highlights Syracuse culture and creativity, and reaches beyond the city by selling poster prints, note cards and poetry.

In addition to recruiting local artists, the Project engages a select ad firm each year. This year it featured work by Tommy Lincoln, “chief kid” at Stay Fresh, a creative studio specializing in design, art, photography and fashion.

The open call drew submissions from 32 Central New York artists. A six-person panel then selected 16 posters for production: first-, second- and third-place posters, and 13 runners up.

The first-place poster is by poet David Manfredi of Syracuse and artist Ellen Edgerton of Syracuse; second-place poster, by poet Matt Tompkins of Charlottesville, VA and artist Leah Hennessey of Baldwinsville; third-place poster, by poet Jeffrey Gorney of Syracuse and artist Cecily Thomas of Baldwinsville.
The panelists were Laurie Reed, marketing director for the Downtown Committee of Syracuse; Alice Maggiore, director of communications for the Downtown Committee; Kimberly McCoy, community engagement organizer at ArtRage Gallery; Cjala Surratt, promotions coordinator at Light Work; London Ladd, independent artist and book illustrator; and D. J. Hellerman, curator at the Everson Museum of Art.
The YouTube premiere will combine posters, poems, video clips by the artists and poets, and live commenting.
To watch and participate in the premiere, subscribe to the Poster Project’s YouTube channel at www.youtube.com/theposterproject.
Soon after the unveiling, the Downtown Committee of Syracuse will install the posters along Salina and Warren Streets. The posters remain on display for a year.
Syracuse Poster Project
Posted 22 months ago