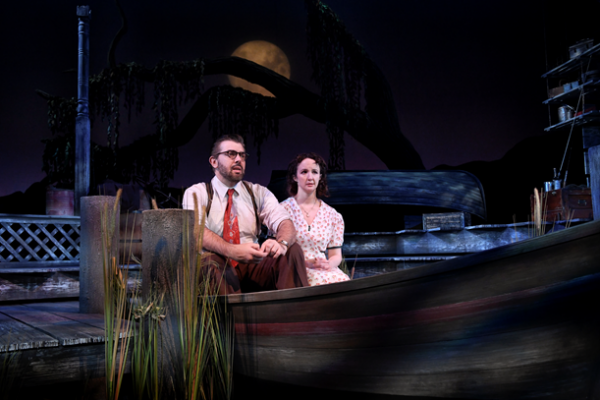 SYRACUSE, NY – Love can overcome our differences and the future is brighter than the present. In such a spirit, Syracuse Stage begins the 2020/2021 mainstage season of six fully staged and filmed productions that will be available to patrons online in video on demand format. 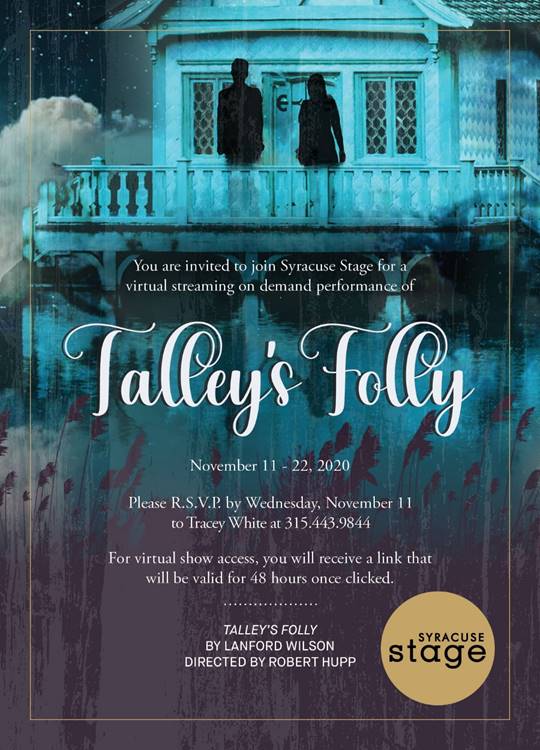 Love as the bridge over a perceived divide is at the heart of Lanford Wilson’s romance “Talley’s Folly,” the mainstage opener, available for viewing Nov. 11 – 22. The play earned Wilson a Pulitzer Prize in 1980. The Syracuse Stage production is directed by Artistic Director Robert Hupp and the two-person cast features Kate Hamill and Jason O’Connell, familiar faces to Stage audiences. O’Connell last appeared at Stage as Salieri in “Amadeus,” the last show presented live at the theater. A playwright and performer, Hamill appeared in “Noises Off” and in her own adaptation of “Pride and Prejudice.” Offstage, Hamill and O’Connell are a married couple.

With a scenic design by Czerton Lim, costumes by Suzanne Chesney, lights by Dawn Chang and sound by Jacqueline R Herter, “Talley’s Folly” will have all of the physical elements of fully staged Syracuse Stage shows. Black Cub Productions will employ a three camera set-up to capture the performance, which will be available in a video on demand format. Patrons need only a valid e-mail address and a device for viewing, such as a desktop, laptop, smart TV or tablet. “Tickets” for individual and household access are available at www.SyracuseStage.org and through the Box Office (315-443, 3275; Monday – Friday, 10 a.m. – 5 p.m.).

“‘Talley’s Folly’ is the perfect play to begin the reimagined 2020/2021 mainstage season,” Hupp said. “We have just the right actors. I couldn’t imagine a better cast to help us get back to work again bringing exciting theater to our audience.” He noted that O’Connell, as Salieri, spoke the last words of the truncated 2019/2020 season, and now he will speak the first of a new, different, but still very dynamic season.

Wilson, who died in 2011, called “Talley’s Folly” a “simple romance” and a “Valentine.” The play takes place on a single night, July 4, 1944. Matt Freidman, a 40+ accountant from St. Louis and in love for the first time, has driven 200 miles into the heart of the Christian farm belt to propose to Sally Talley, ten years his junior and seemingly not interested in him. Having been met at the door of the family home by Sally’s shotgun toting brother (Jews not welcome here), Matt retreats to a Victorian folly of a boathouse on the nearby river, where Sally finds him. At first, she is not pleased.

The play unfolds in real time, 97 minutes according to the script, as this unlikely and mismatched couple endeavor to navigate their way to an understanding of each other’s heart. Like the river beside them, the currents of conversation carry them to unexpected emotional shoals and to the realization that the true folly may be the facades they have built around themselves. A full moon may be romantic, but its light does not discriminate. Love and sorrow, hope and hurt are revealed in equal measure.

A river, too, may contain hidden depths, likewise with Wilson’s deft handling of subtle intrusions from the world beyond the deteriorating boathouse. The date is significant, July 4, 1944, one month after D-Day. In the hospital where she works as a nurse’s aide, Sally tends wounded soldiers recently returned from battle. The callous casualness of the Talley family antisemitism is like a beacon illuminating the atrocity of the holocaust, miles away and never directly mentioned, but present at a discomforting remove, like a sudden chill up the spine on an otherwise warm romantic evening.

Wilson avoids overplaying the impact of these external intrusions on Matt and Sally’s conversation. He keeps sharp focus on the moonlit night, the music drifting across the river from a distant band shell and the two individuals hovering between loneliness and possibility. In Hamill and O’Connell, director Hupp has actors of subtlety and skill who are certainly up to the task.

“We can’t replace the experience of live theater,” Hupp said. “But we can still provide the great plays and great performances that Syracuse Stage does so well. And because you can’t come to us, we’re happy to bring them to you.”

Enjoy a conversation on the relevance of “Talley’s Folly” with director Robert Hupp, hosted by Associate Artistic Director Kyle Bass.

The Wednesday @ 1 lecture will premiere on Nov. 18 at 1 p.m. online at www.SyracuseStage.org, where it will remain available for viewing through Nov. 22.