Opening on October 15th, 2022 at the Sam and Adele Golden Gallery on the campus of Golden Artist Colors, Inc. in New Berlin, New York. The exhibition celebrates the 100thanniversary of artist Jules Olitski’s birth in 1922.

The twenty-one abstract ‘Orb’ paintings in LATE WORKS were made from 2000 to 2006and represent Olitski’s final stylistic investigation. Olitski was an early adopter of acrylic paints for use in his studio practice. In the early 1960s he stained his canvases with liquid acrylics, later he used spray guns to create fields of saturated acrylic color (many of these paintings twenty feet long), and always willing to experiment, he used every available Gel and Molding Paste in his works as they became available.

The ‘Orbs’ are a powerful conclusion to Olitski’s more than seventy years of art-making. His ‘Orbs’ are canvases typically comprising several disc-like hand-applied painted shapes, made often with Pumice Gel or Light Molding Paste. The orb-shapes are suspended over an activated field that was created by blasting Fluid Acrylics with a commercial leaf blower. Notably, the vigor and energetic interplay of pictorial forces in the ‘Orbs’ were made by Olitski in his eighth decade.

Along-time friend of Sam and Mark Golden, Olitski was a springboard for interaction between the GOLDEN Lab and studio for the development of colors and mediums for artist’s use.

Olitski had his first one person show in Paris in 1951 and had more than two hundred one -person exhibitions around the world before his death in 2007.

Golden Artist Colors, Inc. is pleased to present Olitski’s final works in this exhibition, which will run through March 3, 2023. For more information on Jules Olitski and his work, click here. 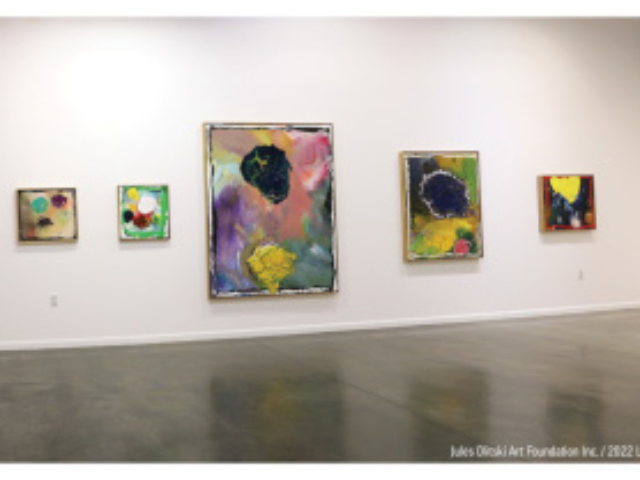