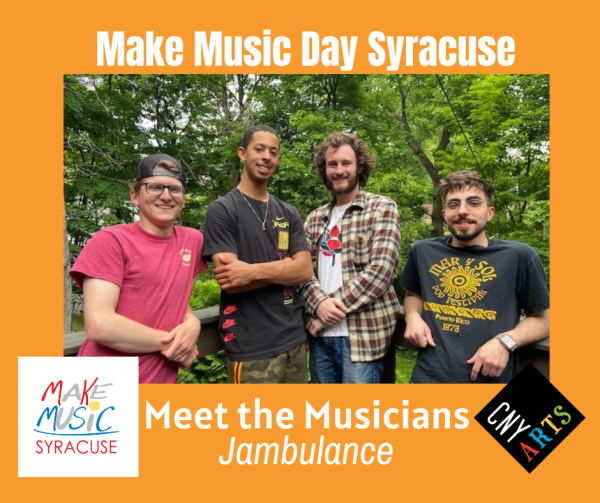 What is your name?

What is your band’s name?
Jambulance

Where are you from?
Syracuse, NY

What kind of music do you perform/what instruments do you play?
Guitar/Vocals - blues/funk/jazz/fusion/rock

When did you start performing/playing/singing? What got you into music?
I always remember singing for a plethora of different events as a child and it became a skill I've always tried to hone since then. I picked up guitar at 12 and that became my main focus over the years.

Are there any musicians who inspire you? What qualities do you admire about them?
David Gilmour, Kevin Parker, Mac Demarco, Chick Corea, Pat Metheny to name a few. I admire their unrivaled musicianship and the atmosphere created by their compositions.

If your fans could remember one thing about you/your band, what would it be?
Any time we play, we hope to spread good vibes. Music is the ultimate uniting force.

Describe your favorite venue for performing.
A place with a similar feel to red rocks but on top of a mountain in the forest with a beautiful view. Prominent stage but not overwhelmingly large. Great area acoustics. Craft beer and good food.

Tell me about your favorite performance in your career.
Playing the Landmark Theatre in March of 2018, biggest adrenaline rush I've felt onstage and most fun I've had playing only a few tunes.

What's the best piece of advice another musician ever gave you?
Go out there and play for you. Remember that above all else you should have fun creating music.