OHA Makes History at the Emmys!

The administrative offices at Onondaga Historical Association (OHA) at 321 Montgomery St. in Syracuse, N.Y., are what you might expect, with solid, antique furniture, and rugs covering hardwood floors. It feels like a cozy den from a step back in time — with aesthetics boasting a muted palette and photos, of course, showcasing local history. However, the shiny, golden Emmy sitting in the glass case outside of Executive Director Gregg Tripoli’s office stands out.

Tripoli and OHA staff traveled to Pittsburgh, Pa., to attend the Mid-Atlantic Region Emmy ceremony held at the Wyndham Grand Downtown on Saturday, Sept 28, 2019. The short film, Let ‘Em Know You’re There: The Story of Big Jim and the Triple Double, which is the brainchild of Austin-based Readily Apparent Media’s Field Humphrey and Patrick Newman, was nominated in the “Sports – One-Time Special” category.

“We are storytellers. Part of our mission is to bring the stories of Syracuse to a worldwide audience,” said Tripoli about the historical nonprofit. “Film has been something OHA has pursued for a number of years. [Film] is the best way to tell a story … and we’ve been doing this for about nine years.” 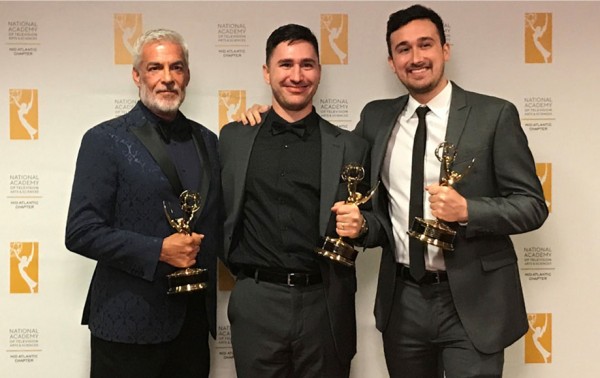 Documentary filmmaking isn’t anything new for Tripoli and the OHA. In the last few years, they released the locally produced full-length documentary Beneath the Surface: The Storied History of Onondaga Lake. The film talks about the long history of the lake, how it served as sustenance and recreation for hundreds of years then was almost ruined by misuse, and recent clean up initiatives.

Just like the ground around Onondaga Lake, Let ‘Em Know You’re There has many layers. The premise focuses on Syracuse Nationals basketball notable Jim Tucker, who held the record for the fastest triple-double for over 60 years.In 1955, Tucker was able to rack up double-digit statistics in three categories in 17 minutes. The record was finally broken in 2018.

The story weaves the past with the present, especially noting Tucker’s current battle with Alzheimer’s, and all the years in between. Although the brain-debilitating disease has affected his memory, some moments are poignant and strong enough.

Plus, there is more to the story. Tucker didn’t play an integral part of Syracuse's NBA team simply to raise stats. He was one of the first African American basketball players to step foot in the professional spotlight.

Coincidentally, the 24-second shot clock was developed in Syracuse. In the early 1950s, the adoption of the shot clock intensified the game of basketball by making it faster, more interesting, and fair. Prior to its inclusion, teams on the offense could take all the time they wanted, passing the ball around and running down the clock. It also forced teams to commit fouls.

“So many people, not only here but particularly outside our local community, don’t know what Syracuse contributed to the game. How guys, writing on the back of a napkin in a bowling alley, changed basketball. We helped integrate the NBA by having the first two black guys on a championship team,” said Tripoli. “One of those guys was the first black guy who set foot on an NBA court.”

Although Syracuse’s rich history has many stories waiting to be told, production is another issue. “We need to partner to do film,” said Tripoli. “We have vision. We know the story we want to tell and how we want to tell it. We can write and direct. We don’t have production capabilities.”

Humphrey and Newman of Readily Apparent Media approached OHA, saying they had a personal connection to Tucker and his family, particularly his grandson. The nonprofit acted as a fiscal sponsor, helped raise money for the film, and assisted with relevant production locations.

With big nominations come big responsibilities. Although the production and storytelling seemed to be on-spot, there were some hiccups. A PBS station in Pennsylvania, supported Let ‘Em Know You’re There. Unfortunately, not all the necessary paperwork was filled out. The nomination was hung in the balance.

“There was a very remote, extremely rare chance I could be added to the nomination after the fact. In order to do so, we had to present a case to the academy that proved my individual, direct creative input,” said Tripoli. “Raising the money, setting up locations, and doing the research … is important, but it doesn’t make you eligible for an Emmy.”

This case would go through a committee via the National Academy of Television Arts & Sciences to determine the film’s eligibility. Having to get to and endure this process is already a red flag, and the strikes against anyone in award ceremony limbo does not look good. The OHA survived the process, which is a rare occasion, according to Tripoli.

The film category came toward the very end of the long night. Aside from the anticipation of the category being called, the excitement of being in the moment, and the overall not getting hopes up, Tripoli said he tried to focus on the delight of simply being nominated.

“When I saw my name on the big screen as a nominee, I blanked out on the rest of the nominees and kept my fingers crossed,” said Tripoli. The envelope opened. The words And the Emmy goes to… were spoken. “I think he got the first couple words out before we kind of exploded.”

Let ‘Em Know You’re There will be shown on programs across the country, including through our local PBS affiliate, WCNY. It’s also available through Amazon Prime as well as the OHA gift shop for $13.99.

Tripoli said the exposure is a second win and more validation for OHA’s role as a   filmmaker that specializes in chronicling local history. He said the organization is already fielding opportunities for film--high-profile offers.

In the meantime, OHA is continuing the educational and developmental track it’s been on. In the spring of 2020, the Brewseum will open in the Iron Pier building at the Inner Harbor. The photograph-heavy exhibit will showcase the local brewing history. The resurgence of the 1850’s Congress Beer is expanding its reach as well. They are in the process of putting out three books: a memoir by Ruth Johnson Colvin, another Dick Case-penned trivia book on the Erie Canal the third, about the mansions on James Street. There is also chat of a possible resurrection of an old restaurant.

“Our history here is phenomenal. It’s had national and international implications. It’s something we as a community we should be proud of. It’s a major motivating factor for everything we do,” said Tripoli.